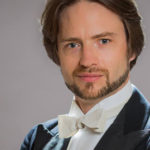 Described recently in the Observer as a ‘tremendous young conductor’, John Andrews is increasingly in demand thanks to a conducting style that combines empathy and feel for both music and musicians with an ability to communicate his ideas directly and powerfully.

As part of his commitment to education work for all ages, John has conducted the Royal Philharmonic Orchestra in the West End Live Festival. He lectures for the Cambridge Music Hubs programme, is currently devising a schools project with the Blackheath Conservatoire, and has lectured at the Elgar School of Music on the birth of English Opera.

John is also passionately interested in locating music in its social and historical context, He has a Cambridge doctorate on the political and religious world of eighteenth-century oratorio, writes programme articles, and has appeared on Radio 4 discussing his research on Handel’s Semele. 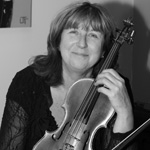 Sally Telling studied violin with Thomas Geradine and flute with William Bartlett at Trinity College London. Whilst there she led the Twentieth Century Ensemble and won a chamber music prize with a performance of Messiaen’s Quartet for the End of Time.

She has worked extensively for theatre and television and as a peripatetic flute tutor for London Borough of Ealing. Sally was the flautist for the London Flute Trio for five years and led the Ealing Symphony Orchestra for twenty years. She currently teaches flute for Hertfordshire Music Service. 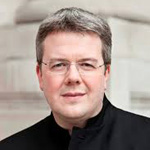 The distinguished cellist and conductor Paul Watkins was Music Director of Trinity Orchestra from 1998-2005. Paul’s increasing international workload, especially after winning the 2002 Leeds Conductors Competition, meant that he reluctantly had to give up this position after seven years. He was appointed the orchestra’s first President on his departure, and continues to be a great supporter of its work.

Acclaimed for his inspirational performances and eloquent musicianship, Paul enjoys a distinguished career both as concerto soloist and chamber musician. Since starting his conducting career with Trinity Orchestra he has also become renowned as one of the UK’s top conductors, becoming the first ever Music Director of the English Chamber Orchestra in 2009 and being appointed Principal Guest Conductor of the Ulster Orchestra.

As a cellist, he has performed regularly with all the major British orchestras and made six concerto appearances at the BBC Proms, most recently in a televised performance of the Lutosławski Cello Concerto with the BBC Symphony Orchestra. A dedicated chamber musician, Paul regularly performs with the world’s finest musicians and gives solo recitals in prestigious venues across the globe. He has been a member of the Nash Ensemble since 1997 and has recently joined the highly acclaimed Emerson String Quartet.

In 2011 Paul came back to join Trinity Orchestra for a special summer concert to mark the end of the orchestra’s 30th anniversary season, performing Elgar’s Cello Concerto and conducting the composer’s Chanson de Matin to a thrilled full-capacity audience.